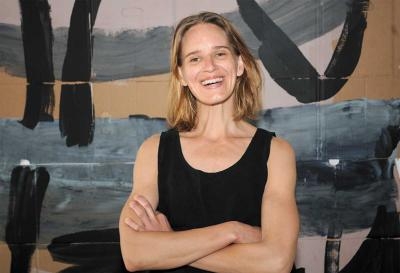 The cardboard she uses often contains images or words. For example, the first large-scale cardboard work, “Twin Thought,” from 2015, was painted on the flattened box in which her son John’s guitar was packaged, with “Gibson” and “fragile” and other words visible along with an image of a headstock and tuning keys.

Cardboard functions as both surface and object, asserting itself in ways canvas does not. “Canvas also has a formal aspect that bugs me a little. I like shows of artists’ doodles, there’s an intimacy when their guard is down, they just let loose. I think cardboard does that for me.”

She works with a big brush and has recently started using rollers. “House- painting tools enable me to cover more surface. I can use the roller more like a brush, sliding it over the surface. But I never make a decision in advance about what I’m going to use on a particular day.”

Her broad swaths of paint, while not thickly applied, have a blunt, material presence. Mr. Negroponte has astutely written about her work: “Her off-centered forms don’t dance; they trudge or traipse by you as in some social encounter. . . . Their quirks and bumps are never smoothed over; their scumbled surfaces allow the world to keep seeping in.”

View the full article on EastHamptonStar.com