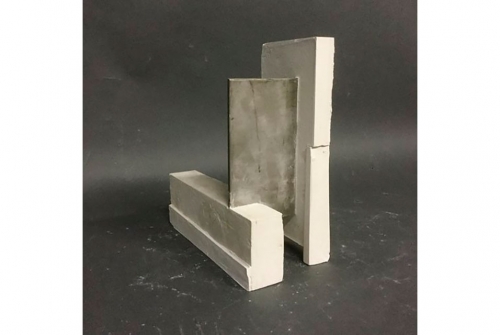 Jack Martin Rogers was born in Warwickshire, UK in 1945. He studied anatomy and fine art at the Birmingham School of Art. He moved to the island of Crete in Greece in 1962, which is when he began painting his most prolific work. Rogers went through many stylistic periods, ranging from fully figurative to abstract. He died in 2001, leaving behind an extraordinary body of work. Seventy-five percent of his estate is owned by his daughter, Anita Rogers.

"Texture, composition, simplicity, and an organic element are all part of my exploration. What unfolds off the wall and/or into space must be aesthetically pleasing and embrace silence after all the work has been done. My materials all come from materials being used in modern homes." – Mark Webber

Mark Webber's sculpture from his prolonged series "Structures: Walls: Portals and Vessels" explore qualities related to architecture, but are firmly sculpture. The conceptual line that divides the two, especially as manifested in "emotional architecture" as described by Mexican architect Luis Barragan, is always at play with his sculpture.

In another series "Structures: Vessels," Webber moves away from the simplicity of the rectangle as a building plane in space and embraces a similar conceptual line in the curves found in naval architecture. With vessels, he explores what can hold space, open and closed, while referencing what defines the canoe/kayak form in sculpture.

Webber resides in Sag Harbor, NY where he has worked as a cabinetmaker for many years. There he learned the craft of making objects and put in his time to develop that ability. Webber studied under Charles Ginnever and Peter Forakis at Windham College in Vermont. He received a BFA in sculpture at SUNY, Purchase. He has exhibited at many galleries in the Hamptons and is in several private collections on the East Coast.