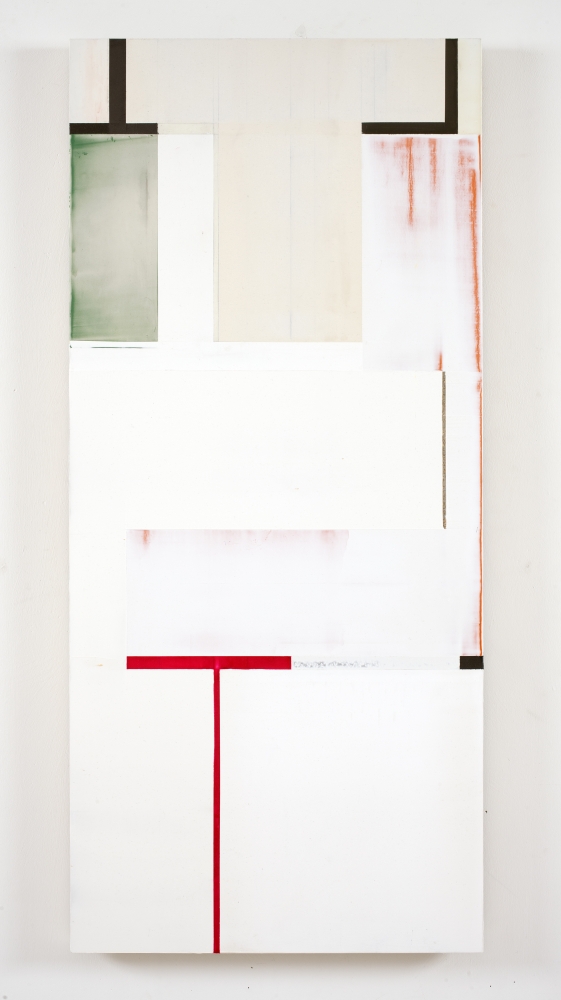 In a conversation at the gallery, I asked the artist about the smudges, scrapes, corrections, and brush strokes that were visible on the surfaces. Waltemath shrugged, suggesting that she feels more comfortable than she used to in leaving residue and mistakes that reveal the process. Elements that she might have corrected or erased now strike her as telling records of the challenges and decisions most painters of geometric shape have to address, concealed or not. Even the tiny black and white pieces made of canvas scraps sewn together by utilitarian machine stitching have an offhand air that evidences Waltemath’s seasoned eye and hand. The painted lines and sewn pieces are not perfect, but here that’s a gift: within essentially mechanical forms, the quirky inconsistencies provide a frisson of humanity.

The paintings, Waltemath told me, also explore the mysteries of human interaction and memory. Lines and shapes painted in subtle ranges of white (impossible to apprehend in JPEG format) deftly organize and occupy the two-dimensional surface of her panels. Upon longer observation, they seem to move, advancing and receding, and creating three-dimensional forms with shifting spatial relationships. From this perspective, Waltemath sees an analogy in the way friendships and other alliances evolve, expanding, contracting, and sometimes reemerging over time. Certainly Waltemath’s new work artfully and unobtrusively, yet very assuredly, reveals its creator’s encounters, thoughtfully marrying content, form, and process.