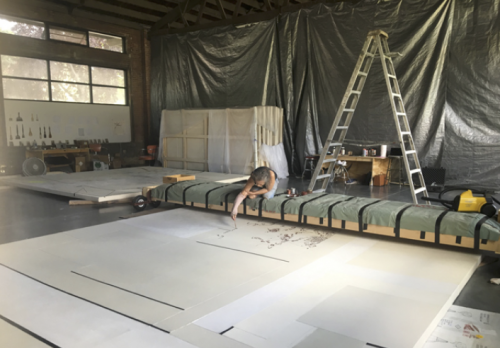 Christine de Lignieres: Your work is visually related to a high — modernist formalism that includes Bauhaus, De Stijl, Mondrian … to aesthetic movements, at a certain period in history. Do you feel a kinship with those artists?

Joan Waltemath: I don’t really approach my work stylistically in relation to Modernism because the kind of geometry that I’m working with is so old, and I mean mostly it’s been used in architecture. If you look at plans from Gothic and Romanesque churches, from the pyramids, the Ziggurats — these geometric forms obey certain mathematical laws of nature. That’s the basis of the grid I work on using harmonic ratios. The lineage of modernism is something that I’m obviously in tune with, but my focal point is more on the timeless nature of the geometry itself and how it’s able to open certain doors of perception.

When I was growing up in Nebraska, the things I looked at were the Plains Indian beadwork and painted hides. I remember that many people were really astounded by the beauty of the Plains Indian show at the MET a couple of years ago and for me that was also a great moment, but a very familiar one that had already impressed me. I could identify most of the pieces in the show, whether I had seen them before — or only in books and often I would know what museums they are in or what part of the country or world. The Plains Indian works and ceremonial objects are really my deepest connection to art. There’s a certain dichotomy between their apparent resemblance to modernism and their actual roots in a much more ancient worldview — and that is true of my own work to some degree as well.

Read the full interview on TheFinch.net