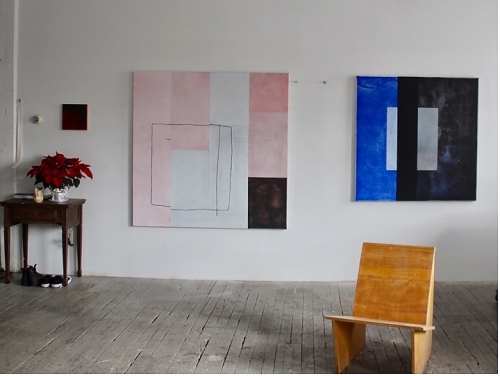 Standing in her Erector Square studio on a recent afternoon, New Haven-based artist Jan Cunningham recalled a bodily reaction to a series of charcoal drawings she had made.

A few years ago, Cunningham invited a friend — a “sophisticated collector,” she said — to view her recent series of charcoal drawings. That friend, a woman in her 90s, stomped her feet and exclaimed, “I just do not understand someone who has a sense of color, as you do, limiting themselves to black and white!”

Cunningham laughed and admitted, “I was as happy as she was to move back to color again.”

Today, color is central to Cunningham’s work as an abstract painter. Her intentionally limited palette — a subtle array of blue, red, black, and white — lend themselves to a surprising variety of results. Intensity, for one, varies greatly in Cunningham’s current oeuvre. Take Flank and Keen, two of Cunningham’s paintings from the last year. The former combines the strength of ultramarine blue with the resolve of black to create a work of assured confidence. The latter stands in stark contrast, exuding nervous uncertainty about the relationship between the light grey and pale red.

These striking differences arise from Cunningham’s masterful manipulation of proportionality and abstract figuration — two elements emphasized by her sparse palette.

“I really loved the graphic nature of the blue, the black, and the white,” she said, so “I decided just to limit it with the occasional red.” Cunningham described her use of color as “subtractive,” a way of “paring down to the essentials.”

Cunningham described her desire to seek proportionality in almost spiritual terms. “Proportion is something that is very very important to me,” she said. “I practice it in my work and it helps me practice it in my life.”

She is pleased when her work “gets to be about the dimensions of the canvas itself.” And yet, practicing proportionality is not as easy as quartering a canvas and expecting to find resolution. On proportionality, Cunningham said, “we feel it in the world around us before we see it.” It can be ineffably satisfying to feel a work of art that strikes a harmonious balance between color, space, and form.

Cunningham’s abstract figures can come in the form of charcoal lines drawn into wet paint or traced templates of arcs and ellipses. She described her abstract figures tenderly, referring to them as “characters” who tell a “story.” Pointing to her canvases, she said, “a figure — a character — could play this role in this short story and this role in this other short story.” She quickly corrected me when I referred to the recurring “symbols” in her painting, saying, “well yes, the characters.”

“I know that I’m an abstract painter,” Cunningham continued, while pointing to one of her unfinished works, “but I still think of this as a figure in the room.” Even though Cunningham works abstractly, she’s not interested in doing away with the traditional hallmarks of painting.