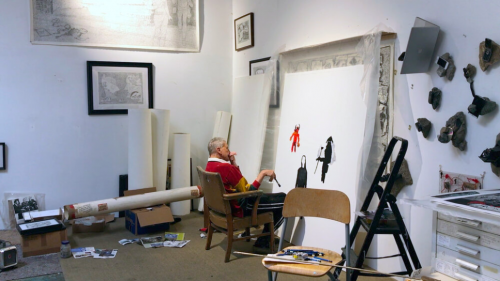 Thanks to his curiosity – and perhaps unwillingness to fit into any category invented to classify filmmakers – director/artist James Scott was able to create one of modern cinema's most perplexing oeuvres. In the second half of the 1960s he came to some prominence with a series of unconventional art documentaries, including Love's Presentation (1966) on David Hockney. In 1970 he co-founded the Berwick Street Film Collective, a legend in radical political cinema, from which he successfully moved towards narrative fiction features, shorts and television; and then into silence.

He re-emerges with Fragments, which returns him to his roots: an intimate portrait of British pop artist/filmmaker Derek Boshier, shot on an iPhone in his studio in California. Boshier, once commissioned by David Bowie, reflects on his life and creative practice while working on a giant drawing, 'World News', and a series of paintings titled 'Night and Snow'.