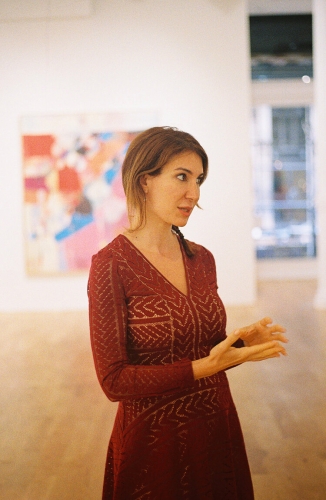 Invisible Habitat: Could you tell us a bit about your life before New York and why you decided to come here?

Anita Rogers: I was born in Dorset, England, and grew up on a Greek island called Halki. The island wasn’t yet on the map when I lived there, and no one knew about it unless you were familiar with that area. My father, Jack Martin Rogers, was a painter and traveled frequently between England and Greece. This was in the 1960s when everyone backpacked and traveled the world to discover themselves. There was much more freedom back then. He met my mum in Dorset, they had me and we lived there for a few years. We then moved to Wales, where we had a beautiful house. My father always liked big houses with lots of natural light and historic architecture; it didn’t matter where it was, whether it had electricity or hot water but the light had to be a certain way.

After years of traveling back and forth, he couldn’t stand leaving Mum and me in Dorset anymore, so he went to Germany and bought Heidi, our 1971 yellow Volkswagen camper. We sold the house to his brother and drove to Greece together. The camper van was my home for a long time. It was amazing.

We journeyed around the Greek Islands during 1981 and searched for a house that had lots of light and was peaceful. One day, as we sailed into the Halki harbor, we saw this beautiful neoclassical house that we called our “peeling palace.” It was a big house with about fifteen rooms and tall columns in the front. My dad immediately wanted to live there and was able to convince the owners to rent it to us cheaply. We called it the “peeling palace” as its white paint was peeling off the walls. It had no electricity or hot water, but it had a lot of light. It was an incredible place.

Eventually, we had to leave Greece to renew our permit on the camper van, and so we moved to Turkey. As foreigners who didn’t speak Turkish, we weren’t welcomed into the community and so we decided to return to England, where we had family. I love England but didn’t enjoy living there. I was bullied at school and didn’t fit in. I just felt different—and not in a good sense. None of us were happy there, so we then moved back to Athens, Greece. Over the next several years, we lived in different cities across Europe. I ended up going back to England for college.

I had always wanted to move to America since I was very young. I instinctively knew I would be happier somewhere more progressive. And that’s why I was attracted to America. I had studied music and trained as an opera singer. When I was a student, you could be an opera singer, a pop singer, or a renaissance singer - but you couldn’t be all those things at once. I had been singing Mediterranean music at night clubs in Turkey and Greece since I was seven - I wanted to be able to sing in all of these ways and not be confined to one type. I always felt America was a country that looked forward, one where I could have creative freedom and be anything I wanted.

IH: What does home mean to you?

AR: New York is home for me. I came here in mid-winter 2003 and the second I landed, I fell in love with the city. I didn’t expect it to be so incredible. The city gave me the feeling that you could achieve anything if you worked hard at it. Greece will always be my home in my heart; it’s the place I love most in the whole world. But New York will always be home for the rest of my life. My apartment here has floor-to-ceiling glass windows, and I can see the Freedom Tower on one side and the Manhattan Bridge and Uptown on the other side. I’ll often stand there at night and feel so grateful to the city. At night, the skyscrapers twinkle with possibilities, and to me, it looks like magic. In some ways, it feels like New York belongs to each one of us.