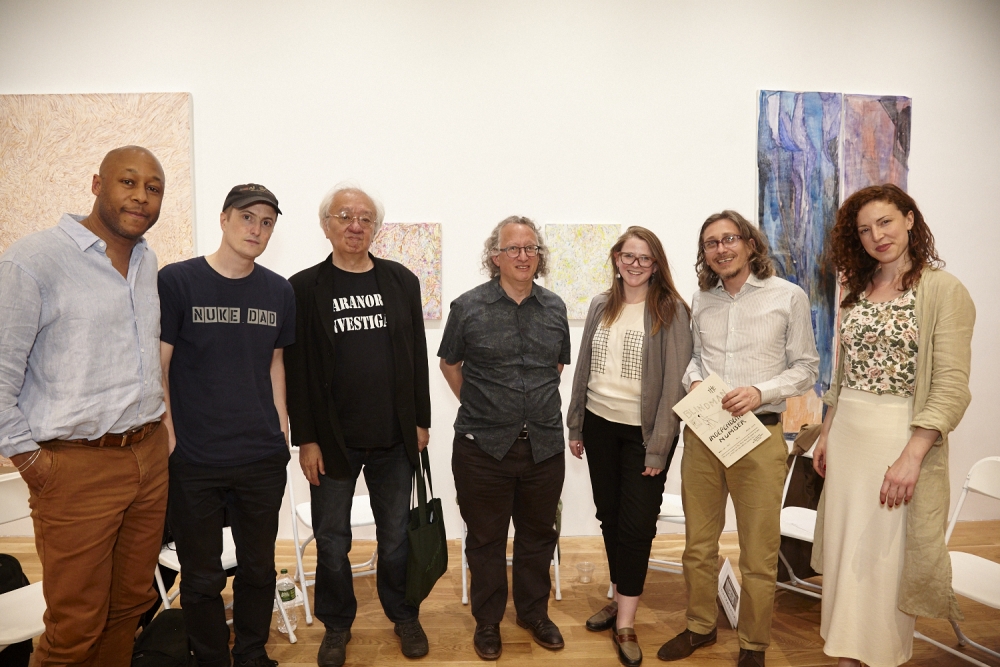 “I see, said the blind man”
An Evening of Readings and Discussion

In tandem with the exhibition The Divine Joke, curated by Barry Schwabsky, and in celebration of the recent publication by Ugly Duckling Presse of a new facsimile edition of The Blind Man, the renowned little magazine published by the circle around Marcel Duchamp in 1917, Anita Rogers Gallery and Ugly Duckling Presse present an evening of readings and discussion inspired by The Blind Man. Along with Duchamp’s collaborative rongwrong and Man Ray’s Ridgefield Gazook, also reproduced in the new edition of The Blind Man, it was part of a network of little magazines that introduced audiences to avant-garde movements in art and literature; they featured contributions of poetry, prose, and visual art by Mina Loy, Louise Norton, Robert Carlton Brown, Erik Satie, Walter Arensberg, Francis Picabia, Alfred Stieglitz, and others. The Blind Man was the first print publication to circulate an image of Duchamp’s Fountain (photographed by Stieglitz) after its rejection from the first annual exhibition of the Society of Independent Artists, presenting a public challenge to the accepted definition of art during this time. Copies of the new edition of The Blind Man will be on sale at the event.

This exhibition title, The Divine Joke, is taken from Mina Loy’s contribution to the first issue of The Blind Man: “The Artist is jolly and quite irresponsible. Art is The Divine Joke, and any Public, and any Artist can see a nice, easy, simple joke, such as the sun; but only artists and serious critics can look at a grayish stickiness on smooth canvas.” The participants will present excerpts from the two issues of the magazine as well as other relevant texts, followed by what promises to be a lively exchange of ideas about the complicated relationship between eye and mind, blindness and insight in contemporary art.

Diana Hamilton – director of the Writing Center at Baruch College and the author of two books of poetry—God Was Right(forthcoming from Ugly Duckling Presse) and Okay, Okay (Truck Books)—and four chapbooks.

Barry Schwabsky – the curator of The Divine Joke, art critic for The Nation, and author of several books of poetry and criticism, including Trembling Hand Equilibrium and Heretics of Language (both from Black Square Editions) and The Perpetual Guest: Art in the Unfinished Present (Verso).

Sophie Seita – editor of the new edition of The Blind Man (Ugly Duckling Presse) and a Junior Research Fellow at Queens’, University of Cambridge, working on Provisional Avant-Gardes: Little Magazine Communities from Dada to Digital (forthcoming from Stanford UP). She writes poetry, translates contemporary German poetry, and makes performances that visualize and embody text via sculpture, costume, installation, and choreography.

Christopher Stackhouse – writer and artist, author of Plural (Counterpath), co-author (with John Keene) of Seismosis (1913 Press), contributor to Basquiat: The Unknown Notebooks (Skira Rizzoli). He is currently writing a monograph of the work of painter Stanley Whitney for Lund Humphries.

Matvei Yankelevich – a founding member of the editorial collective of Ugly Duckling Presse. His books include Some Worlds for Dr. Vogt (Black Square Editions), Alpha Donut (United Artists), and Boris by the Sea (Octopus). His translations include Today I Wrote Nothing: The Selected Writings of Daniil Kharms (Ardis/Overlook).

John Yau – poet, art critic, and Professor of Critical Studies at Mason Gross School of the Arts (Rutgers University). His recent books include monographs on the work of painters Thomas Nozkowski and Philip Taaffe (both from Lund Humphries) and collections of criticism (The Wild Children of William Blake, Autonomedia) and poetry (Bijoux in the Dark, Letter Machine Books).

View photos from the event.