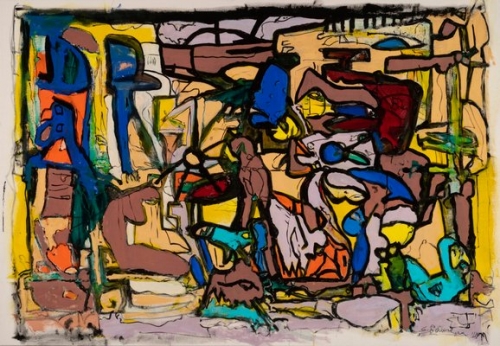 ”A World of His Own Making.”

Seven months ago Claude Lawrence completed a significant work titled “Eastside Ruminations”: it’s made gutsy by jolted figures, anthropomorphic prompts, and heavy black contouring that gives the work the look of a stained glass window. It glows. The organization of this painting is not unlike other works by Lawrence from this period as it highlights dispersed forms brought together by a deliberate and straightforward touch. Puzzle-like shapes proliferate on the surface and are defined by calligraphic marks of various densities and thicknesses.

A majestic ultramarine blue, cadmium red, and lemon yellow punctuate an already rambunctious landscape. In reality almost no forms overlap, instead they snuggle up and create clusters or configurations on a larger and more substantial framework. The sense of a controlled disorder lurks throughout this work and lends itself easily to free association and fantasy. “Eastside Ruminations” has swagger and warrants all the space it takes up in the world. The musician turned painter renders his own feelings with pigment knowing full well that any visual reconstruction has limits. The picture plane will always be that mysterious fusion of fact and fiction where the physical becomes transformed into illusion and then almost simultaneously resumes its previous state. De Kooning famously described himself at work as a “slipping glimpser”:

You know the real world, this so-called world, is just something you put up with like everybody else. I’m in my element when I’m a little bit out of this world: then I’m in the real world.

Never too polished or too raw, Lawrence keeps his search honest and straightforward. He came of age as a visual artist in the 1980s when New York City was still considered the imperial center of culture. During those years Lawrence maintained a career both as a jazz musician and painter and he developed friendships with other more established African American artists like Jack Whitten, William T. Williams, Peter Bradley, and Joe Overstreet. In the 1960s and 70s these artists exhibited their work in New York with sketchy results as the art world was slowly souring into a period of posturing and appropriation. Jack Whitten recalled:

For black artists doing abstract painting, there was no support whatsoever. Even through the early '70s, nobody reached out. There was a great divide there.

Thankfully, a more recent and sweeping reevaluation of many African American artists from this period is correcting this injustice and bringing very deserved attention to the astonishing work of these artists. The list includes the aforementioned plus among others: Edward Clark, Adger Cowans, Melvin Edwards, Terry Adkins, Stanley Whitney, Sam Gilliam, Gerald Jackson, Maren Hassinger and Linda Goode Bryant.

Lawrence landed in New York during the 1980s when the art world was over-hyped, over-saturated, unbridled, and plagued by a lack of critical distance. The idea of an epicenter had been forged much earlier after the war in the 1940s when the USA received Europe’s artistic avant-garde by the boatload. New York City became the triumphant hub because artists from everywhere quite simply followed the money trail to New York and brought with them Surrealism and Abstraction. A painter arriving in NYC in the late 1980s was greeted by a pictorial vernacular rooted in experimentation and defiance. The implacable father figure and art critic Clement Greenberg had been cut down to size and swapped for the deconstruction of anything/everything formal. However, the visceral and painterly ambitions of a painter like Lawrence probably found an amenable atmosphere in this unraveling of tradition and practice because everyone prided themselves as beginners. During these years Lawrence is aptly grappling with figuration, abstraction, a sense of direction, the complex language of painting, and studio time.

Fortuitously, Lawrence retreats to Sag Harbor for two extended stays from 1994 to 1998 and again from 2001 to 2006.  These years in Sag Harbor provide Lawrence lengthier periods of time to make work in a very beautiful, new surrounding. This historic whaling community had once been designated as the first port of entry into the USA; Sag Harbor could also claim an African American community dating back to the 18th century. As importantly, Lawrence landed not far way from Jackson Pollock’s home and studio: 10.9 miles directly east. Pollock had died some 40 years earlier but his legend still had enormous resonance. Trickle down aesthetics work. Lawrence experienced the same sea and sky as the master and like Pollock bravura took Lawrence a long way forward. His creative pursuits in Sag Harbor were dogged and strong-willed like a heavyweight boxer elbowing and flexing his way around a ring.

After leaving Long Island, the ensuing years find Lawrence in yet another peripatetic mode practically making art with his studio on his back. By 2013 acquisitions of his work start piling up in major museums throughout the USA, 3 the Metropolitan Museum of Art, the Studio Museum in Harlem, the National Gallery of Art, and the Parrish Art Museum. This institutional recognition has fueled Lawrence to produce new and larger works: bolder, even more direct, and blissfully vivid. At first glance these new and larger paintings look like they were painted crude and fast but they are hardly makeshift. They are artifacts that are set apart, self-sufficient, and speak on their own terms. Purged of restraint, Lawrence has moved into a universe of visual freedom: released from reason and relieved of all baggage. His nomadic life is visually granted respite and in this breathing space we find the fruition of years of work. We see the visible traces of a hand rooted in the real, the indivisible, and the not-manipulated. Lawrence has delivered works that leap up and don’t let go, proving once and for all that he is very much alive in a world of his own making.