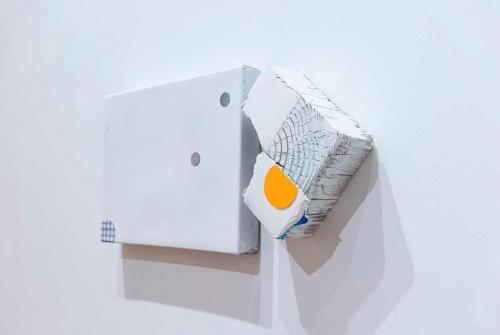 NEW YORK, NY.- Anita Rogers Gallery is presenting When Love Comes To Town, a solo exhibition of works by George Negroponte. On view are his mixed media paintings completed over the last several years using house paint, spackle, gesso, wallpaper, dirt, enamel, inventory circle labels, and spray paint on canvas, as well as found objects from the surrounding woods. Negroponte’s works on paper, first begun in Sweden in 2008, were set aside for a decade and resumed this past year in collaboration with his wife, Virva Hinnemo. These small and evocative compositions include truncated shapes, veil-like mists, vehement and nuanced marks, unusual color, and punctuated holes. While all the works are marked by an indeterminable amount of paint, some are diptychs with tree fragments and found objects. Negroponte takes pains to tackle the unlikely reconciliation of incongruent parts.

George’s new works are evocations more than representations. They conjure the ephemeral by the simplest, most practical means. They are small enough to feel private to the viewer. Sparse, excruciatingly molded, and relentlessly edited, The “Walkings on Water” go against any rational depiction of walking, as they ground and envelop the viewer in a living atmosphere of air and light. Their levitation is like a child's supernatural powers projected upon the world. The “Marriages” evoke the most essential elements: earth, air, and fire. They are the charmed remains of an always fresh and intensely personal collusion. It’s not that George brings his life into his work: he is so completely invested in both that life can’t stay out, and, in the end, we are graciously invited to see what matters most to him.

He has been reviewed by major art periodicals including The New York Times, Artforum, Art in America, The New Yorker, ARTnews and The New Criterion. He has taught painting and drawing for over two decades at The Studio School, Parsons School of Design, The School of Visual Arts and Princeton University. He has organized several shows including On Line at Feigen Contemporary in 2003, Drawing in The Present Tense at Parsons School of Design in 2000 and Bernard Chaet at the Studio School in 1997. He has also written on many contemporary artists. He was Co-Chairman of The Board of The Drawing Center from 1997-2002 and was appointed the first President of the institution in 2002. His involvement with The Drawing Center spanned three decades. George Negroponte and his wife Virva Hinnemo moved to Springs, Long Island in May of 2012. Negroponte works as a fundraising consultant with several non-profit organizations in NYC and makes art in his studio in East Hampton, NY.