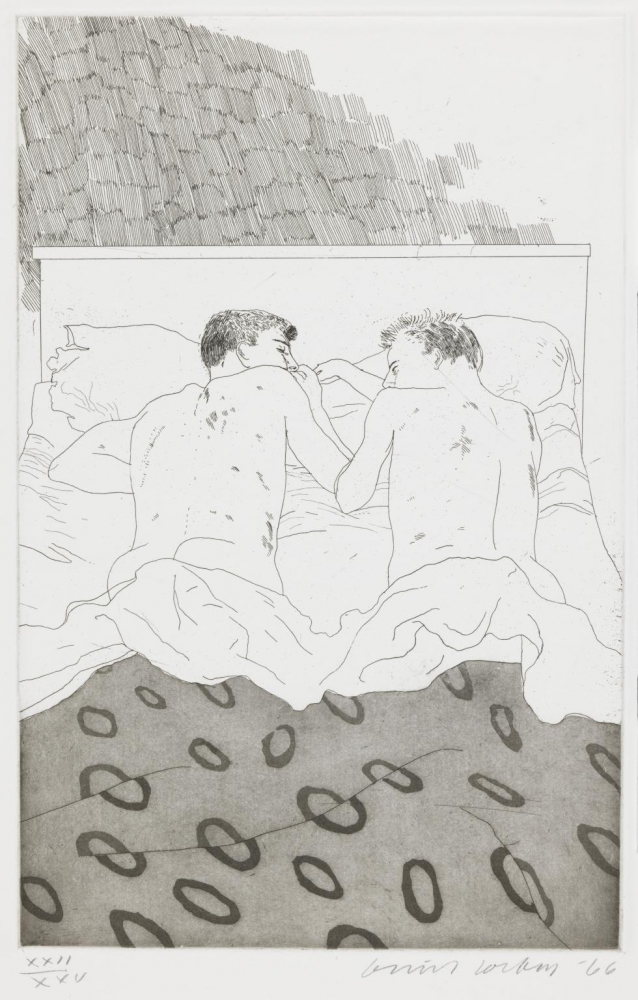 In 1966, only four years out of the Royal College of Art in London, David Hockney was already a star. James Scott, a contemporary of Hockney’s, had received acclaim for short films he’d made with actors such as Drewe Henley and Anthony Hopkins. Scott wanted to make a documentary, something with an artist, so he asked Hockney, who agreed. Scott’s twenty-seven-minute film, Love’s Presentation, 1966, was the centerpiece of this exhibition at the Anita Rogers Gallery; the show also featured Hockney’s “Illustrations for Fourteen Poems from C. P. Cavafy,” 1966, the etchings at the core of Scott’s film.

In the film’s opening sequence, Hockney is shown front, back, and in profile: a mug shot in motion. In a voice-over, an unknown man reads a text by the critic Jasia Reichardt: “Talented painter, superb draftsman, astringent humorist, and entertaining raconteur, as much space in the press has been devoted to his clothes, hair, habits and accent as to his work.” Reichardt defines Hockney’s practice as “grasping in pictorial terms the essence of the grotesque in contemporary life.” The British Council apparently couldn’t handle Scott’s vision of contemporary (i.e., homosexual) life, and asked him to remove the footage of Hockney wearing a sweatshirt emblazoned with the number 69 and the work’s final section, in which the artist reads three Cavafy poems over shots of his etchings. Anita Rogers could handle it, and offered the original, uncensored version.

Read the full review on ArtForum.com