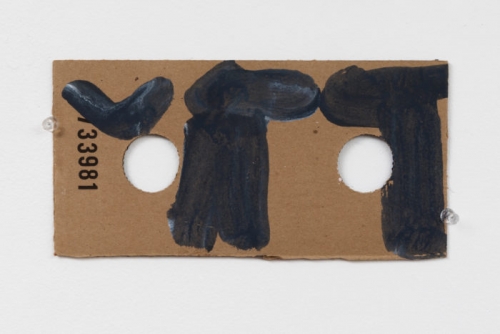 Virva Hinnemo lives far out on eastern Long Island, and her artwork looks very much like the art of the ab-ex painters who made that area so well known. Her art, overwhelmingly black and white, and sometimes on such proletarian surfaces as cardboard, has a touch of the primitive to it. The compositions are direct, unmannered and actively self-sufficient. They point to a time when such unfettered abstraction was the dominant idiom in the New York area; we pretend that is so still, although it is clear by now that the style is currently a matter of individual performance, practiced by talented persons such as Hinnemo. In such a show as this, where the work necessarily participates in a historical, indeed what amounts to a scholarly, situation, we must see it with a bit of a prepossessed eye. There is nothing wrong in doing so–in all the arts, it looks like artists are referencing the past if they are working with traditional idioms–it does mean that such painting takes place, inexorably, alongside what was distinguished before it. Foreign painters such as Hinnemo, who is Scandinavian by birth, inevitably align with previous efforts here (Franz Kline comes regularly to mind on seeing her paintings), even if she comes from far away.

Like many of the images, Road and River (2017) is small: 14 by 11 inches. It is very much Kline-like in its declaration–a bold, highly structured, but also intuitive design. The overall composition might resemble a person bending over, on his knees, but the title offers guidance toward a reading based on nature. Looking at the image as if one were above the landscape, as the painting’s name indicates, it does seem like a road is connecting two parts of a major waterway. The overall pattern of the image would then be viewed as if its audience was flying over it. Doing so would enhance the experience of the painting, but it would also lessen its abstract qualities when looking at it straight on. It has been remarked that abstraction occurs in realism, and the other way around; maybe this work illustrates the comment quite well. Still, it is impossible to see it as nonobjective or realist in the same moment; we shift from one perception to the other. The same is true with Four Feet (2017), which is larger at 24 by 28 inches. Again, the name of the painting orients us toward a view based in real life, but in visual terms, the work actually seems highly abstract–or at least poised between figuration and abstraction (it also looks a lot like a simplified landscape). Four Feet doesn’t make very clear the meaning of its title, but like Road and River it balances across the continuum of realism and nonobjective painting.

The acrylic-on-cardboard painting Horizon (2017) is also small: 5 ¼ by 6 ½ inches. It consists of a V-shaped stroke, on the left, and two columnar forms with tops, standing next to and slightly above the two circular holes cut into the brown ground of the cardboard. The work is whimsical and free, perhaps to the point of excessive freedom, although this kind of abandonment has been the staple of lyric abstraction in America for a long time. To fully acknowledge the success of the piece, the viewer also has to appreciate the act of its making, which is silently recorded in the painting. This is the key generally to abstract expressionism, and specifically to Hinnemo’s art. (The artist does this sort of thing very well, but its historical repetitiveness can also be noted.) Laundry I (22 by 30 inches) is one of the larger pieces in the show. It consists of a group of four very dark colored, reddish-black thick strokes imposed on thinner black lines, which describe an open, more or less vertical and horizontal structure. The design has been established on a piece of paper. With the help of the title, we can easily see the composition as clothes hanging on a line, although this tends to be done after we read the work abstractly. Whatever the criss-cross between abstraction and realism might be, Laundry I works as a painting, its ambitions accomplished both within recent art history and outside it. It looks like it is impossible for the work–and the show–to be other than historically minded even as Hinnemo rekindles life into a lyric idiom. But it may also be true that her work can stand alone, without support from the past; the show is strong enough to uphold this reading.