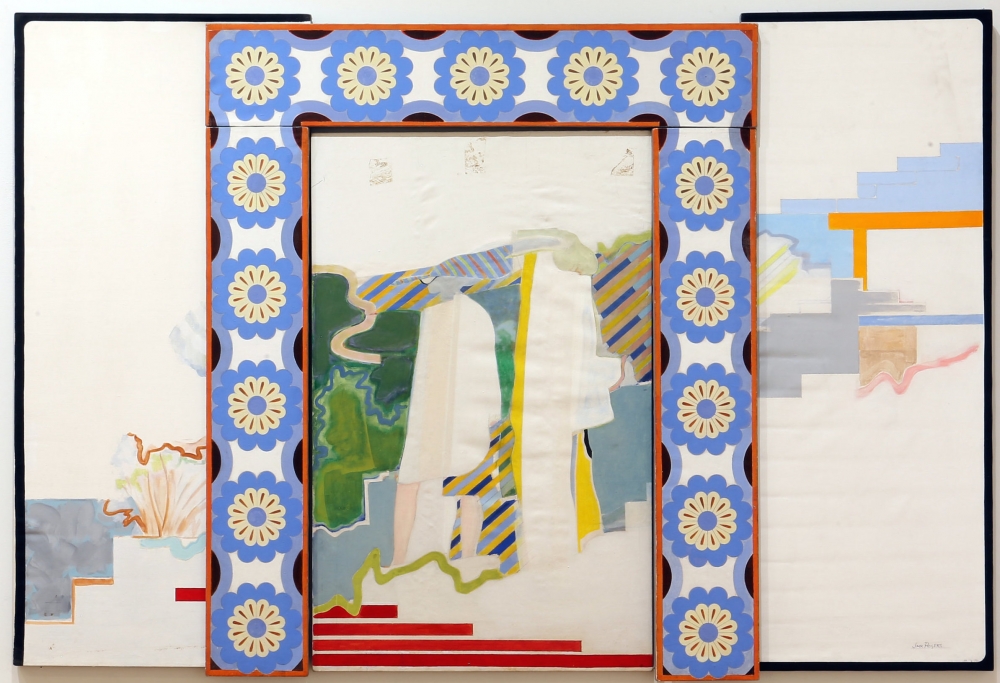 The Anita Rogers Gallery in Soho is currently presenting a collection of work by Jack Martin Rogers for an exhibition entitled Odyssey. The show is the first U.S. solo exhibition of work by the late British painter and features a collection of his drawings and paintings throughout his career spanning 40 years. Rogers spent most of his life studying the relationship between time and its role in human experience and he also believed that the only way to move forward in creating art is to appreciate and learn from contributions of the past. He captures this belief in his work, which presents traditional subjects, such as classical and religious architecture, alongside modern ones.

One of the artist’s most significant works on display is a large-scale six-part canvas painting of Knossos, the largest Bronze age archaeological site in located on the Greek Island of Crete. In this painting, Rogers pulls the ancient ruins from the past into the present by using abstract designs such as the periwinkle-blue floral patterns that frame the image and bold colors including the bright and dark shades of green on the surrounding grass.

Other notable works in the show include Rogers’ portraits which are meaningful character studies. One of the most notable of the pieces is a painting entitled Rosemary which evokes a sense of solitude as it depicts a young woman standing against an azure-blue colored background wearing a long, silky dress with shades of pink, purple, and blue. Her head is turned away from the viewer as her long, silky black hair hangs freely. She appears deep in thought as she holds a triangular artifact in one hand and a rectangular artifact in the other and rubs the two pieces together. Other portraits and character studies in the show include sketches such as Pencil Portrait, depicting a 19th-century style woman with her hair in a bun and wearing an old-fashioned dress, and the sketch Greek Papas depicting an older Greek gentleman with a long, thick white beard and small black hat gazing up and out into the distance.

Another noteworthy aspect of the show is the fact that some of Rogers’ paintings like Cretan Girl and Rhodes have clear outlines and shapes while others like Reclining Nude and Warwick have a more ethereal quality. Cretan Girl depicts a young girl wearing a pale blue dress with black and white stripes standing tall with her hands by her waist and as she her balance as while walking along the smooth edge of a rocky wall. Behind her leg is a figure of a vase and the background image consists of an orange circle covering nearly half the page depicting sunshine. The painting entitled Rhodes captures the classic landscape and architecture of Greece and its islands depicting a group of towers and dome-topped buildings surrounded by tress including one palm tree. A similar painting entitled Warwick also depicts a city but is painted in a dreamier matter. Reclining Nude is also painted in this same, elegant style featuring a young woman lying on her bed unclothed. The soft pales colors used such as the pure white of the bed, the skin color of the woman, and her golden blonde hair contrast with the black background.

Rogers was born in Warwickshire, England in 1945 and was classically trained in anatomy and fine art at the Birmingham School of Art where he developed his meticulous methods. He began his career creating a large body of preparatory drawings before moving on to paintings, offering the viewer a rare glimpse into his process. Rogers moved to Crete in 1962, which was his most successful and prolific period. Many of the works featured in the exhibition come from his time in Greece as he was greatly inspired by the landscape there, and was also inspired by classical literature and music. He died in 2001, leaving behind an extraordinary body of work.