Anita Rogers Gallery presents a group exhibition featuring works by Carrie Johnson, Gordon Moore and Kazimira Rachfal. Collectively, the show serves as an exploration of line, of balance and of the stylistic and psychological complexity of seemingly simple spatial forms. The show will be on view from July 26 through September 6, 2016 at 77 Mercer Street, Suite 2N in New York City.

Carrie Johnson (American, b. 1958) received her MFA from Yale in 1982. She now lives and works in New York City. Untitled, the artist’s large oil on canvas piece in this show, is an interconnected mix of elegant, organic lines in muted tones with pops of color. The layered piece is ripe with detail and texture. On the work, Johnson states:

Gordon Moore’s (American, b. 1947) current paintings are informed by the artist’s long history and deep understanding of the photographic process. These works begin with black and white photographs, often of found objects or of carefully constructed designs the artist creates himself. Moore then develops the images in the dark room, embracing, and even encouraging, the imperfections inherent in the interactions between the developer chemicals and the paper. Moore uses these developed surfaces, rich with depth and shadow, as the grounds for his oil paintings, which use restricted palettes of bright colors to complement the monochrome backgrounds. Inspired by Picasso and de Kooning’s use of line, the resulting pieces are linear, balanced works that challenge the viewer’s natural perceptions. The collection of works on view are thoughtful meditations on connections - on the intersections between flatness and depth, deliberation and spontaneity, the real world and the painted world and finally, between abstraction and figuration. Originally from Cherokee, IA, Moore received his MFA from Yale University in 1972. He has been the recipient of several awards and grants, including a fellowship from the New York Foundation for the Arts, National Endowment for the Arts-Visual Artists Fellowship and the Louis Comfort Tiffany Foundation Award in Painting. His work is part of many prestigious collections, including the Museum of Fine Arts, Boston (MA), Baltimore Museum of Art (MD), the Block Museum of Art (IL), Chase Manhattan Bank, General Electric Corporation, and Yale University Art Gallery (CT). The artist lives and works in New York.

Kazimira Rachfal’s deeply resonant oil on paper collages are inspired by Tantra drawings from India.  Made by anonymous artists, they first appeared in 17th Century religious treatises that were copied from generation to generation. This new body of work is entitled 'squaring the circle', Series I. The title of the series refers to the alchemy of constructing divine perfection with earthly materials. Rachfal's use of "earthly materials" is exactly what makes these small, iconic collages so intimate and evocative. Simple in form but not strictly minimalist, these richly colored works, painted on handmade Indian paper, are deeply soulful contemplations on wholeness and unity. Rachfal, born in Poland, lives and works in New York City. 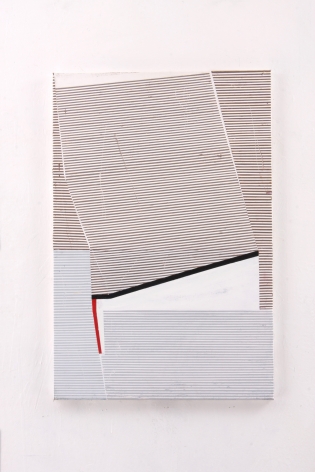